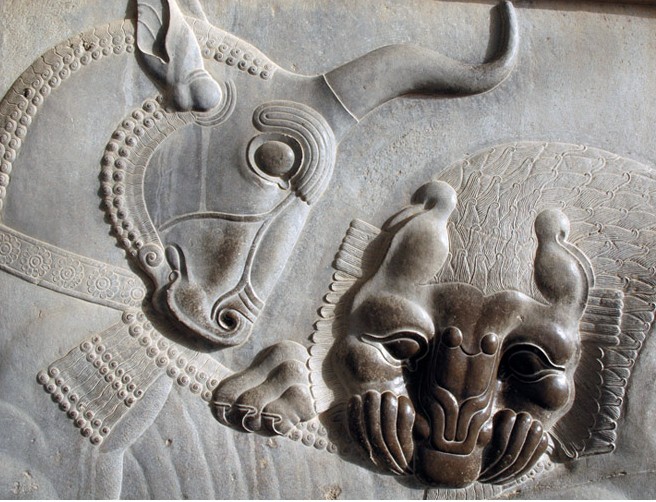 Persepolis bas-relief / carving of lion and bull in combat

Our reproduction of this ancient stone carving.

Scene from Persian mythology: Angra Mainyu kills the primeval bull, whose seed is rescued by Mah (Avestan: Maonghah, the moon) as the source for all other animals.

Our process and history of this piece: 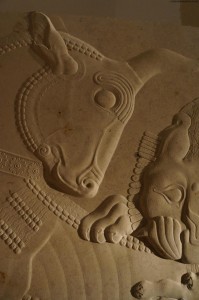 Our reproduction of this ancient artefact

Using 3d modelling software and CNC machining with relief tools and carvers, we have recreated this ancient stone depiction of a lion sinking its teeth into a persian bull.

Carved out of a large piece of Limestone it has very fine detailing, and is extremely faithful to the original reliefs, which can be found at the great audience hall at Persepolis, modern day Iran.

They decorate two monumental stairways which give access to the hall, which have been ruined first by conquerors and then time. Examples and reproductions can be found at the British Museum and now our own humble factory. 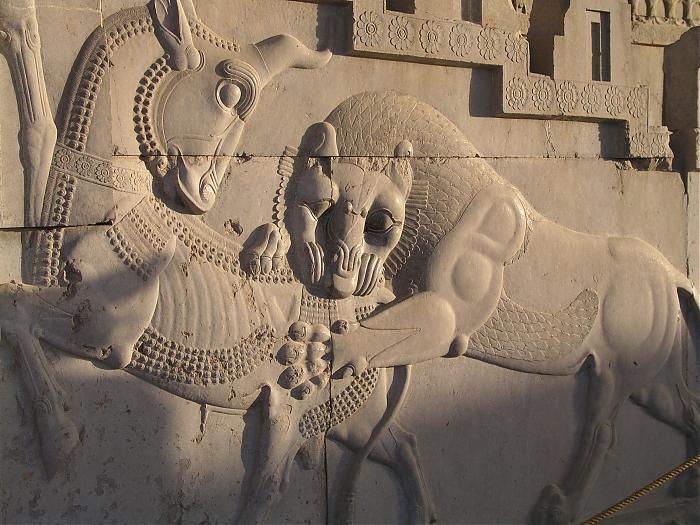 This relief of a lion battling a bull is seen at the ancient throne room of Darius in his palace at Persepolis, the seat of his vast Achaemenid Empire. The lion is seen in Persepolis as the symbol of absolute power and heroic triumph. The bull is also a symbol of power in ancient Persia and is seen throughout Persepolis on top of columns and guarding gates. The magnificent palace complex at Persepolis was founded by Darius the Great around 518 BC, although more than a century passed before it was finally completed. Persepolis was called by the Greek historian Diodorus Siculus “the richest city under the sun, with storehouses filled with gold, silver, and all kinds of riches.” When Alexander the Great and his army looted and burned Persepolis in 331 B.C. they did a very thorough job. According to the Greek historian Plutarch Alexander carried away the treasures of Persepolis on “20,000 mules and 5,000 camels.”

There are a number of interpretations on what the creatures represent. Some biblical, astrological and seasonal.

See the wikipedia page on persepolis.

Having a love of history and of all things stone, upon seeing an example of this relief at the british museum we simply had to recreate one in Limestone.

The process begins with gathering various pictures, showing every angle and detail we may need, then gradually building an exact replica in a 3d art package. Using those reference photos we model on the computer as you would with clay in your hands, adding and taking away material.

Then we generate machine code for the CNC workcentres to rough out the carving. In soft stones like limestone this process can take over 4 hours for a large piece of stone, then a long finishing pass with a fine point tool can take between 10-20 hours.

One of the main reference photos: 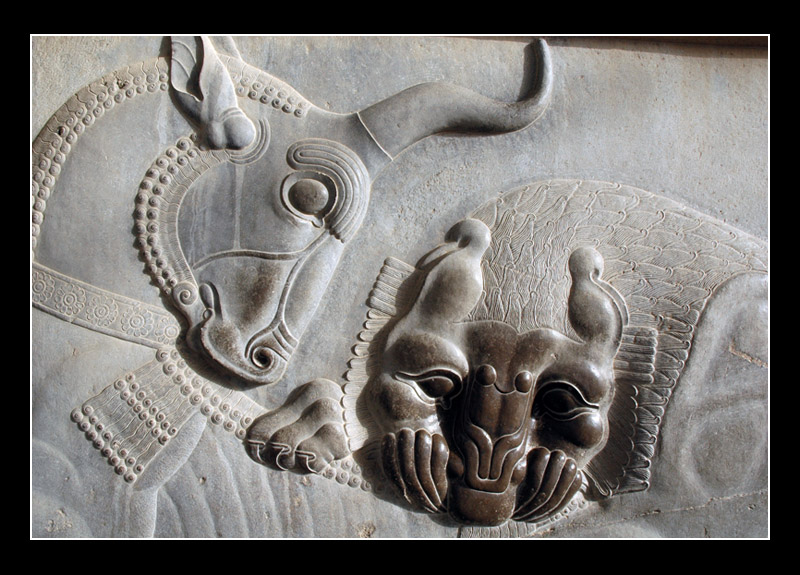 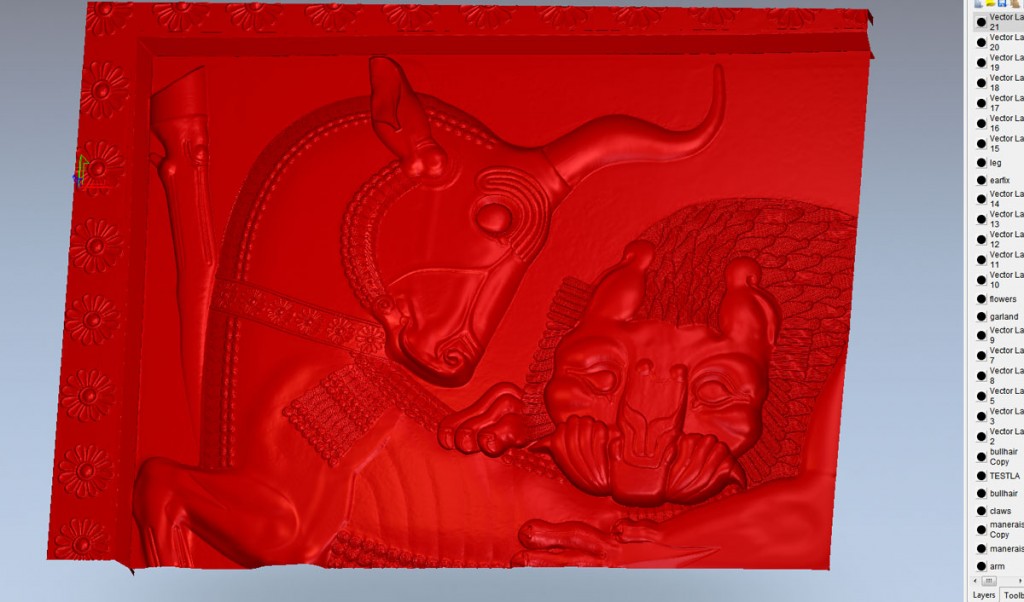 And what we carved on the cnc machine: 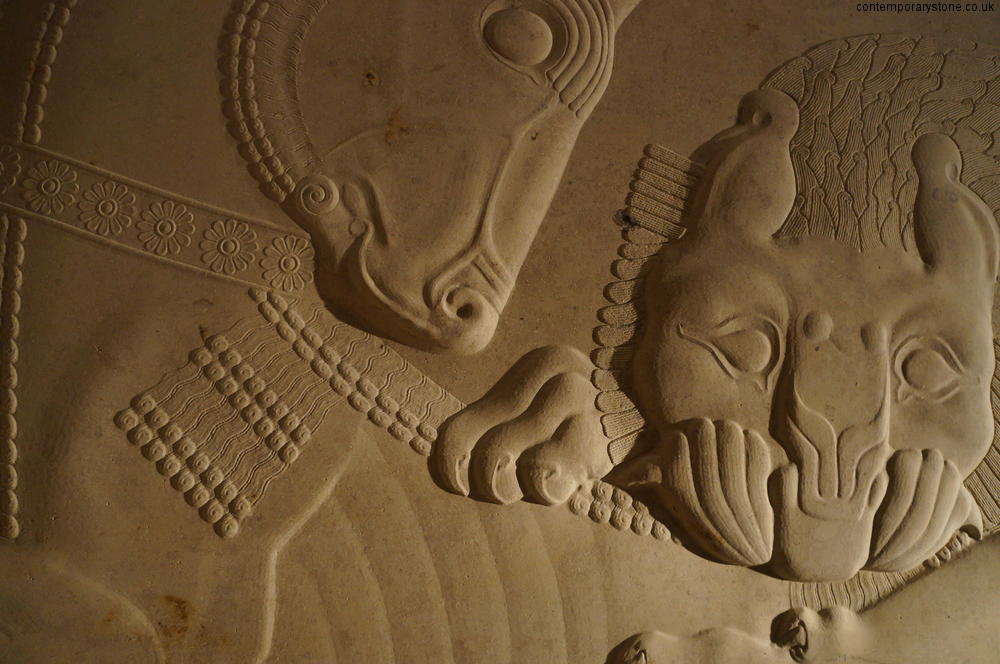 Click the above image or HERE to go to the portfolio entry.